Kitlinar is a language I created in 2016 when I was developing the first version of The Gate at the End of the World. While that version of the story never ended up working out, the conlangs and worldbuilding were something I decided to keep. 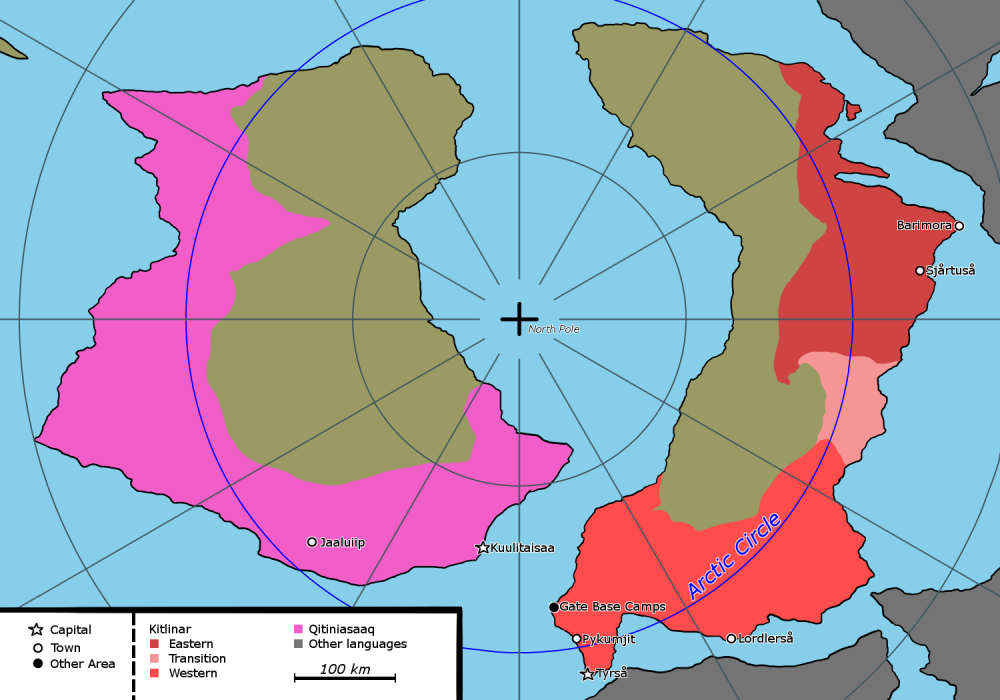 Kitlinar is a language spoken on the eastern parts and islands of the land of Kitlin (called Qitin by the Qitiniina). It has been spoken in Kitlin since before recorded history. It is a language isolate and its origins are unknown, though the language was likely brought to Kitlin by its speakers, who are unrelated to the indigenous Qitiniina. Kitlinar has many loanwords and some grammatical influence from Qitiniasaaq, the language spoken by the Qitiniina.

The phonology of Kitlinar was primarily inspired by the Swedish & Norwegian languages. Before I reformed the orthography, it used <å> instead of <ä> to represent /æ/. You can see this in the old map up above; I only have a png version and can’t change the text.

With the exception of /j/, the palatal consonants are allophones of /Cj/ clusters in the Western dialects. In the Eastern dialects, they are independent phonemes.

Retroflex consonants are allophones of /rC/ clusters in transition dialects, while they are independent phonemes in Eastern dialects.

/a/ is usually /æ/ in Eastern dialects.

Primary stress falls on the initial syllable. Monosyllables are unstressed.

Pronouns are marked for case and number. The third person distinguishes animacy.

The first person singular and plural are unique words, while the plurals of the 2nd and 3rd persons just take on the plural.

Nouns are either animate or inanimate and are marked for case, number, and definiteness. Plants, animals, humans, and things like weather and volcanoes are animate, while things that do not or never move are inanimate. This is distinguished only through the definite suffix; case and number are marked in the same way on animate and inanimate nouns.

There are three cases: nominative, genitive, and object. The object case covers direct and indirect objects of verbs; in that manner, it’s essentially a combined dative/accusative case.

Adjectives precede nouns and take on the case, number, and definiteness of the noun.

Verbs are conjugated for mood and tense.

The future tense is used exclusively with the subjunctive mood:

The imperative mood is used for commands; the verb stem is preceded by word tal:

I know the past and present tenses look pretty similar to English’s (-d for past tense verbs and -ng for present tense) but I genuinely was not thinking of that when I was creating the tenses, and I don’t particularly feel like changing it, either.

Kitlinar has no copula; in places where English would use one for statements of of existence or fact, Kitlinar uses a “factual statement” particle, lirs: